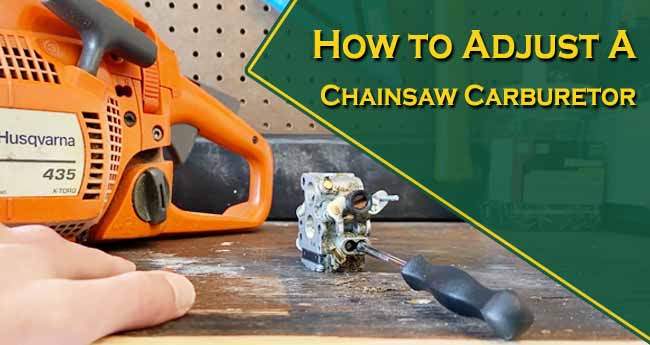 A carburetor is an exceptional part of a chainsaw that controls the quantity of fuel used by the machine.

It is crucial to tune this section of the chainsaw properly because otherwise, your tool could malfunction and become difficult to use. A too costly adjustment could damage the engine eventually, which is why you need to be super careful with tuning.

Why Is Carburetor Important?

When it comes to a fuel chainsaw, a carburetor determines how little fuel will mix with air, which helps run the tool.

If too much fuel mixes with air, the engine will eventually get flooded with fuel. And too little fuel will leave chainsaw with less power, which means there will be smoke. As a result, there will be a build-up of carbon, which could damage the engine.

Carburetors of most chainsaws come with three adjustments:

This adjustment controls how much air and fuel will mix for cutting speed. A few people might argue that this is probably the most critical adjustment screw out of all three.

If this adjustment is too high, the saw will not reach a required RPM level needed for maximum power. Too low of modification will give you an RPM level where cylinder seizure and bearing failure could occur.

This adjustment determines how much air and fuel will mix during idle speed. Too less of an adjustment will make engine surge due to starvation. And too high of a change will cause the engine load up and eventually die. The engine could also die if the adjustment is extremely low.

How to Adjust a Carburetor?

Tips for the Process

Make sure the machine is lying on a flat surface first. There should be no extra items around the saw, especially near the chain area. You do not want anything to snag on the chainsaw blades by mistake during the adjustment process.

It is a great idea to wear protective hand gear such as leather gloves. Also, have a set of safety goggles on, along with a full-sleeved shirt and long pants too.

Because the carburetor is a key piece to the chainsaw, it is a good idea to know how to adjust it. In this way, you could make sure that your machine has been running appropriately. As a result, your tool will last you a long time.

Some Other Chainsaw Related Articles: