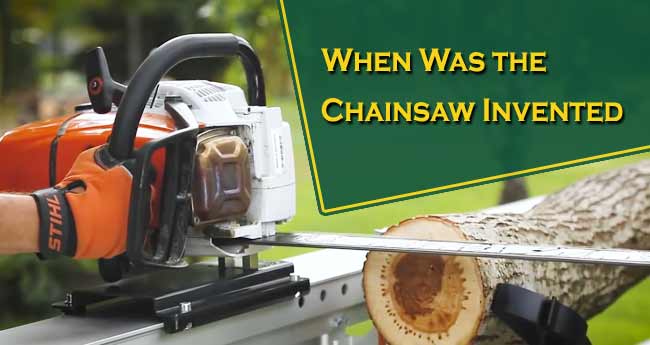 Did you know that the first set of chainsaws were invented to aid with childbirth? These machines were and still are quite practical and handy tools to have around at home.

It does not matter if you want to clean up your yard, cut, gather firewood, or clean through messes of trees after a storm, chainsaws are there to help you through it all. But when did these tools first come into existence?

Today, consumers are all about purchasing the best electric chainsaw to help around with chores and tasks in the garden and backyard. However, that was not how these machines were viewed back in the 1800s.

Back in the 1830s, a German orthopedist named Bernhard Heine came up with a design of a chainsaw-like device called an osteotome that could cut through bone. Also, during the 1800s, Scottish doctors called James Jeffrey, and John Aitken invented spinning blades.

These early versions of electric saws were made to cut through a woman’s pelvic bone during childbirth. This process was known as symphysiotomy and was performed without any anesthetics. Thankfully, that practice stopped, and chainsaws came to be used in a way they are used today.

When Did the First Saws for Woodcutting Come about?

In 1918, the first portable saw was prepared by James Shand, but that could not make quite an impact. However, in 1926, a German engineer known as Andreas Stihl brought about quite a revolution in the world of chainsaws.

He created the first-ever electric saw for timber work. And just three years later, he made a gas-powered version of the same product. A German businessman named Emil Lerp had already begun preparing gas-powered chainsaws during 1927, but Stihl is given credit for inventing a motorized and mobile saw.

Enhancing the Features of Chainsaws

From the 1940s to the 1990s, there were several additions and revisions to form an original chainsaw, each adding to the efficiency of these products. These additions made this tool more user-friendly and handy to own.

For instance, during the 1940s, aluminum was used in the saws, and engine designs were altered to make the saws lighter.

The first chainsaw that could be operated by one man was put into production during the 1950s. And during the 1960s, the world saw the introduction of an anti-vibration system; this made it easy for users to hold the saw for longer periods.

Several revisions were made during the 1970s to prevent and reduce any chances of kickback. For example, blades with a thinner tip were introduced, and chains that were low profile were created. In 1991, to get rid of the pull cord phenomenon, an automatic starting feature was added to the chainsaws.

Today, there are not just top-notch electric, but also gasoline chainsaws. Moreover, Guide bar lengths vary, as per your needs. Other different factors, such as batteries used and weight of the saw, also differ from chainsaw to chainsaw.

These tools have come a long way, and continue to become more and more developed with each passing decade. We could only imagine how useful and eye-catching the next generation of chainsaws will be!